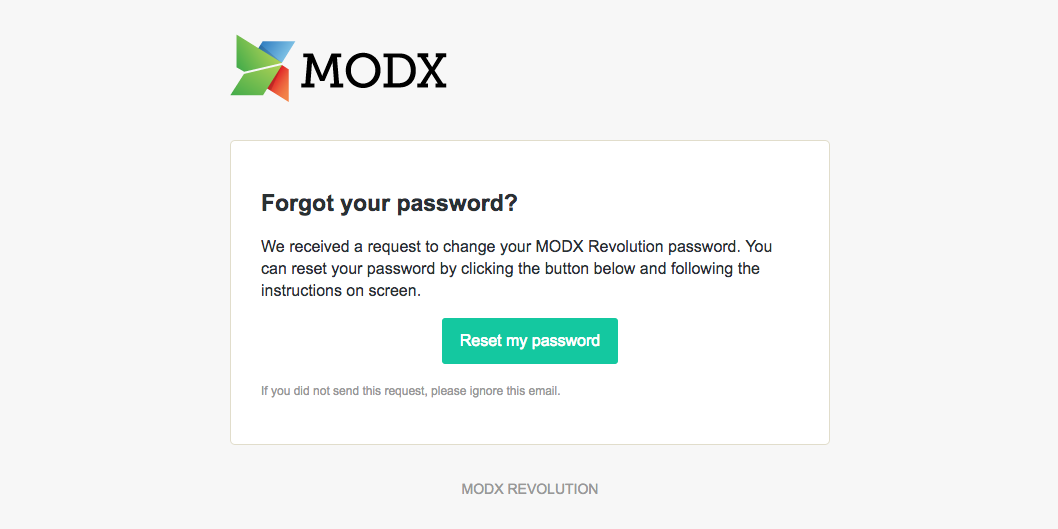 The second week of our MODX3 project featured continuous work on the login window, improved HTML emails from the manager and a new forgot-password flow, compliant with the new EU regulations. A long-time request has been implemented: manager customization for both create and update actions! Last but not least: MODX is now installable through composer and an install script.

In (EU) privacy regulations, it isn't allowed to send out passwords in your emails. That's why we changed the full password-reset flow to not include them anymore. You now get a link where you can set your new password and set it again to verify your password.

MODX sends out several emails, for example, when generating a new password for a user. These emails don't have a very consistent look & feel. Some are HTML emails, some are plain text emails. We try to make everything more consistent and started by making the HTML emails look much better! The emails include a modern look and contain the same logo as the login screen, which you can overwrite in your system settings.

Are you using Manager Customization in MODX? Then you probably recognize the annoyance of having to create every rule twice! Once for resource/create and once for resource/update. You can now use a wildcard to do it for both! Example: resource/* - Great work by Mark!

A CLI installation script was built to enable developers to have a better workflow. In the old 'current' way of working you either download or clone MODX and then install it via the browser. With Vasily's installer script in 3.x, you can install MODX via the CLI as well.

During our big changes, we also come across small bugs and deprecated code and features. An example is the removal of the compress-js feature in the manager, which is far from stable, which we have removed.

STAY UP TO DATE

Stay up to date on all updates of MODX3 with our newsletter.

You can also download the newest version of MODX.